Welcome to the functional library. This series will explore the state of functional programming in PHP and highlight some libraries for common tasks.

This post will look at iteration and lazy operations based on a sequential abstraction.

Yes, you heard right. Sequential abstraction. That's a fancy shmancy word for something we already have in PHP called Iterator. An iterator is really just an object that represents a stream of values.

As a consumer of an iterator this really just means one thing. You can foreach over it, like this:

But there's a few other properties of iterators that are quite interesting. One in particular is laziness.

Laziness means that the iterator is able to fetch data on demand, which allows you to process that data as it arrives (reducing latency) and only keep a bit of it in memory at a time (reducing overall memory consumption).

Note: Of course there are trade-offs and lazy-everything isn't always the best solution. For example, disk seeks tend to take some time. So batching reads in large enough chunks is still important for overall performance.

Now. One problem is that once you use foreach, it will start consuming the iterator on the spot. And thus you instantly lose the laziness. It is possible to retain it though, and I will show you how.

By using functional primitives that operate on sequences, you can describe high-level transformations on sequences.

There is a better way.1

All of the boilerplate is gone. It is now just one single line that describes the transformation.

It gets better. The laziness is no longer broken. map does not take an array of values, it takes an iterable of values. And it returns, you guessed it, an iterable of mapped values.

How does it do that? We'll get there. But first, let's define what map actually is.

map is a function that takes a function and a sequence. It returns a new sequence where the function has been called on every element of the input sequence. 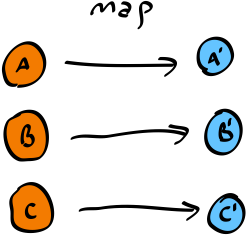 Because you are forced to pass in a function, the resulting code will be more modular. It's less convenient to nest things, like it was with foreach, and I'd argue that that is actually a good thing.

Another advantage is that map deals with values and returns you a new value that is much safer than modifying existing arrays in a loop.

It turns out that map is just one of many high-level iteration functions. I will show you a few more.

There is a better way.2

All of the boilerplate is gone. It is now just one single line that describes the filtering.

filter is a function that takes a predicate and a sequence. It returns a new sequence that only contains the elements for which the predicate returned true. 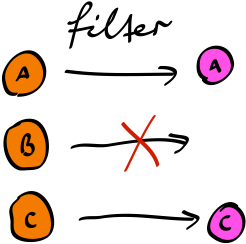 Now remember every time you wrote a loop that did both filtering and mapping in the body. Since there are now two separate functions for those, you can separate those responsibilities. First filter, then map.

It gets better: Because both filter and map are lazy, the result of chaining them will also be lazy. This allows you to compose lazy workflows that only get processed on demand.

There is a better way.

All of the boilerplate is gone. It is now just one single line that describes the search. 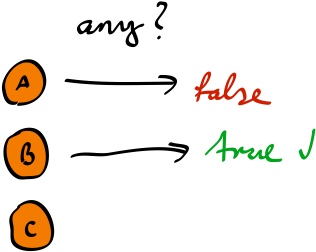 What did I tell you about laziness. Since any aborts as soon as it finds a match, the rest of the sequence is not processed. This means that any calls affecting the remaining elements do not need to be executed.

All of the examples above are based on Nikita Popov's most excellent iter library.

It makes heavy use of a new feature introduced in PHP 5.5 by Nikita himself: Generators. Generators are the magic sauce that make everything lazy. You can think of them as a sane way of writing iterators by suspending execution.

The iter library is awesome. It has lots of these iteration-related functions that are very common in functional languages. I'll list a few:

Brought to you by @igorwhiletrue.

Projects you may be interested in: Silex, Stack, YOLO, React.